A very warm welcome to Dunedin from HealthStaff Recruitment

Located on the south eastern coast of the South Island of New Zealand, Dunedin is the second largest city in the south and a well-known university town with an envious student life.

Dunedin has a population of approximately 120, 000 and the city has a large Scottish heritage. (Dunedin is Celtic for Edinburgh). In 1848, Scottish migrants established the settlement and thirteen years later, gold was discovered in Central Otago (about 120 kilometres inland) and the small settlement of Dunedin became the centre for the nation’s wealth.

Soaring cathedral spires, a magnificent railway station, fine banks and office blocks, New Zealand’s only castle and old Victorian university buildings are among the city’s architectural treasures. The city is renowned for its proximity to incredible wildlife.

The Otago Peninsula, a brief drive from the city centre, is home to a colony of the world’s rarest penguins, the only mainland breeding colony of the royal albatross, rare New Zealand sea lions and the magnificent Larnach Castle. A world of recreational opportunities awaits the active at heart. 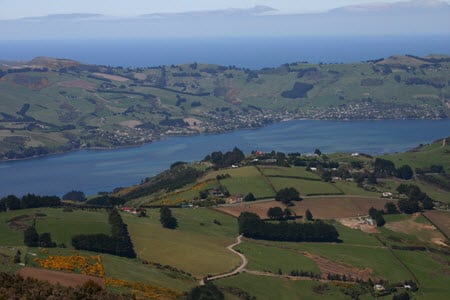 Relive New Zealand’s great sporting moments. Learn about the great New Zealand sports achievers. Housed in the historic Dunedin Railway Station, this is the only one of its kind in New Zealand.

Visit the world’s steepest street, acknowledged in the Guinness Book of Records, located just 1.3 kms from the Botanic Gardens. Whether you walk, run, drive or just visit, you may buy a certificate at the shop. This is a ‘must see’ and do for all visitors to Dunedin. At its steepest section the gradient is 1 in 2.86. Every year during Dunedin’s Festival, large numbers of athletes, including family groups, take part in the social and competitive foot races to the top of the street and return. These races are known as the ‘Baldwin Gutbuster’.

The garden is open daily from dawn till dusk. Information Centre, shop, conservatory and Alpine House are open daily 10 am to 4 pm. Cafe open 9.30 am to 4 pm daily.

For all Dunedin travel, accommodation and activity bookings, check with the Dunedin Visitor Centre.