A VERY WARM WELCOME TO SYDNEY FROM HEALTHSTAFF RECRUITMENT

Australia’s premier city is the oldest settlement in Australia. Built on the shores of the stunning Port Jackson, you would have to die and go to heaven before you could see a more spectacular setting for a city.

The centre of Sydney is on the south shore of the harbour, about 7kms inland from the harbour heads. Shady Hyde Park and the Domain parkland to the east, Darling Harbour to the west and the main harbour to the north soften the CBD, like a mini Manhattan. 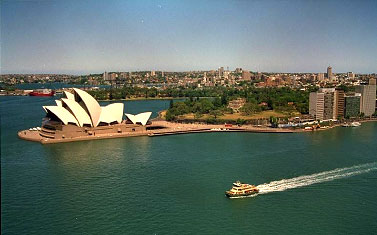 Sydney’s main walk-in tourist information office is the Sydney Visitor Centre. It is located at 106 George Street in The Rocks, Sydney. They are open every day of the year.

The Rocks is the oldest, quaintest part of Sydney. Reinvented by visionaries in the building industry and the trade union movement in the 1970s, the Rocks is now an historical tourist precinct, full of cobbled streets and colonial buildings. A stroll around the Rocks can be delightful with attractions including weekend markets, the Earth Exchange, the Geological and Mining museum as well as numerous craft shops and art galleries. But it is the old buildings, alleyways and historic facades that attract most visitors. Try exploring the less developed areas such as in the suburb of Millers Point where you will find the Lord Nelson Brewery Hotel and The Hero of Waterloo, two of Sydney’s oldest pubs.

Circular Quay is built around Sydney Cove and is considered by many to be the focal point of the city. The first European settlement in Australia grew around the Tank Stream, which now runs underground into the harbour. For many years this was the shipping centre of Sydney, but it’s now both a commuting hub and a recreational space, combining ferry quays, a railway station and the Overseas Passenger Terminal with harbour walkways, restaurants, buskers, parks, the Museum of Contemporary Art and of course the Sydney Opera House.

Australia’s most recognisable icon is dramatically situated on the eastern headland of Circular Quay. Palm fronds, according to architect Jorn Utzon inspired its famous sail-like, shell-like roofs, built between 1959 and 1973. It’s a truly memorable place to see a performance or to sit at one of its outdoors cafes and watch harbour life go by. The Opera House hosts theatre, classical music, ballet and film, as well as the seasonal opera performances. There is free music on the prow of the Opera House on weekends and a craft market on the forecourt on Sunday.

This huge waterfront tourist and leisure park comprises walkways, gardens, museums, an aquarium, convention centre, casino, eateries and shops. It was once a thriving dockland area. The highlights are the Sydney Aquarium, the Australian National Maritime Museum, the water sculpture, the Chinese Garden, the massive IMAX cinema, and the nearby Powerhouse Museum, Sydney’s most spectacular museum.

The harbour offers sailing, canoeing, and windsurfing opportunities. Spit Bridge and Balmoral are the best places to hire equipment. Good surf beaches include Bondi and Tamarama on the south shore and Narrabeen, North Avalon and Palm Beach on the north shore. Manly is the centre of Sydney’s diving scene. The harbour beaches at Camp Cove, Neilsen Park, Balmoral and Chinaman’s Beach offers picturesque swimming, but there are no waves.

There are plenty of coastal bushwalks in the Royal National, Ku-Ring-Gai Chase and Sydney Harbour national parks. The 10km Manly Scenic Walkway follows the harbour from the North Shore beachside suburbs to Spit Bridge on Middle Harbour. Another spectacular but much shorter walk is along the cliffs from Bronte to Bondi Beach. You can hire horses to ride in Centennial Park, the large park between Paddington and Bondi.

If you like great experiences, and who doesn’t, Sydney is one huge party town. There is something exciting happening every day and every night and you have got to be part of it.

Everybody loves fireworks and each New Years Eve, Australia’s most spectacular display of pyrotechnics explodes over Sydney Harbour. Seemingly the whole of Sydney crams the shores to experience this visual feast. You’ve probably seen Sydney’s world-famous Millennium festivities on TV so why not be there for the real thing next New Year’s Eve? Sydney’s calendar bursts with special events including the free open air concerts of the Sydney Festival in January followed by the dazzling harbour activities on Australia Day, the Royal Easter Show, City to Surf Fun Run in August, Sydney to Hobart yacht race on Boxing Day and Australia’s biggest annual party the outrageous Sydney Gay Mardi Gras in February.

Most information about what’s on in Sydney is now published on the Internet. To find complete lists of performances, events for children, sport matches, exhibitions and all ticket prices, the better Internet sites are: