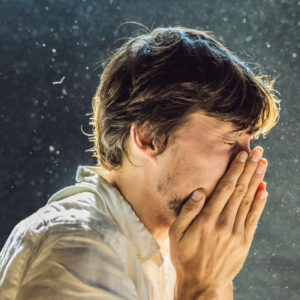 Occupational lung disease has experienced a resurgence in the last five years in Australia, thought to be due to the increased popularity of stone kitchen benchtops.

Benchtops made from bluestone, marble and granite are expensive and so cheaper options have been made available, however artificial stone benchtops are typically made from crushed silica rock and contain up to 95% of crystalline silica.

Subsequently, builders and tradespeople are at risk of developing silicosis when cutting or shaping the material if they inhale silica dust particles.

Around half of new kitchen and bathroom benchtops in Australia are made from products containing very high levels of silica and Cancer Council Australia data shows that more than 570,000 workers in Australia were exposed to silica dust in 2011. Even a tiny amount of inhaled crystalline silica can cause progressive lung damage. Silicosis develops slowly and initially there may be no symptoms, often the condition is not diagnosed until the lungs have already been permanently scarred. Even when workers wear masks to avoid breathing in dust, the tiny particles can remain on clothing and furnishings.

At the end of last month, the Victorian state government announced a ban on the dry-cutting of materials that contain crystalline silica dust and employers may be liable for prosecution if they do not allow the use of water to dampen the dust, which is considered a safer workplace practice. WorkSafe will conduct inspections of workshops to ensure new wet-cutting standards are being complied with. The Victorian government also intends to provide free health screenings and education seminars for those who work in the stonemason industry.

Other dangerous dusts which can cause lung disease include grain dust, beryllium and coal dust. Known colloquially as ‘black lung’, Coal Workers Pneumoconiosis (CWP) is caused by long exposure to respirable coal dust. Workers in the coal industry or those involved in the manufacturing of graphite or man-made carbon products are most at risk.

Once thought eradicated, the condition re-emerged in Queensland in 2015. Since then more than 100 cases of mine-dust-related diseases have been confirmed, 35 of them Coal Workers’ Pneumoconiosis. CWP can progress into progressive massive fibrosis (PMF), it is therefore a potentially fatal disease which develops over many years and currently there is no cure.

Silica dust is also found in Queensland mines and considered 20 times more toxic than coal dust. Amongst calls for a ban on artificial stone benchtops and a levy on mining companies to fund health care costs, General Practitioners are being encouraged to ask people about their occupations and to refer patients with respiratory illnesses for chest screening if they work in mining, construction, or manufacturing.